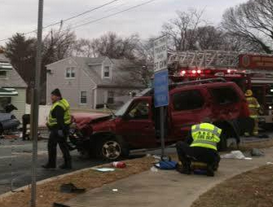 At around 8 a.m., emergency crews responded to the intersection of Stewart Avenue and Old Stage Road in Glen Burnie for a report of a crash.

Several people had to be freed from their vehicles and two helicopters flew three people to Shock Trauma.  The helicopters landed at Corkran Middle School.

A fourth person was transported to Shock Trauma by ambulance.

The crash is still being investigated at this hour.